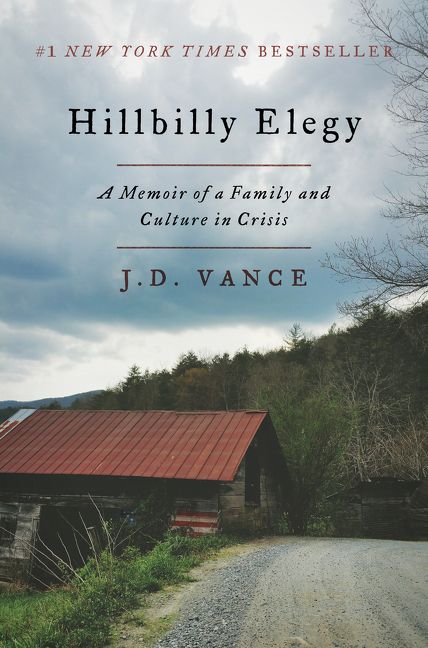 Hillbilly Elegy is not a political book (thankfully so) but everything is connected. Why are things the way they are? There’s one class of American citizens whose financial and social prospects are down in almost every category – America has failed them. And author/hillbilly J.D. Vance argues, they’ve failed themselves as well.

To be specific, when Vance says hillbilly he’s referring to a specific set of white American. And that’s the Appalachian, mostly scots-irish descendants. Who, for many years, supported themselves and their families through high paying coal jobs. When those jobs began to go away, they were lured away in droves to places like Ohio for big factory jobs at places like Armco Steel. Almost everyone in young Vance’s town came from some part of the Kentucky hills. While this may be a small subset, I believe Vance is right to assume that his experience can be extrapolated across a lot of working poor.

Hillbilly Elegy is about the “white trash” of America – Vance as one of them. Their lives, how they live them, why they live them, and how Vance escaped repeating the cycle. He has sharp criticisms for the government but especially the people in the community. The bizarre sexism, the family strife, drug abuse, domestic abuse, the people who do not practice what they preach. How horrible childhoods beget horrible childhoods in a never ending cycle of pain.

That’s the social aspect. The economic aspect is about communities built around jobs: what happens when those jobs disappear? When coal disappeared, Vance’s community was approached by Armco Steel to move to Ohio. They did. Armco went under and shipped jobs overseas. Now all these transplants are in a new place with no jobs and why don’t we add an influx of prescription drugs to help take away the hopelessness of it all?

Vance has a sharp diagnosis. Reflective and intuitive. This is a moving book. But he has a real lack of solutions. They seem to boil down to, the government should do more, but also less, and think more about how programs affect the poor. And that people should stop being assholes to their wives and kids, preferably through faith. Kind of thin.

The only portion I didn’t care for was Vance’s time at Yale. Yes, we know you escaped. This means you’re an elite now. Don’t act like you’re not. At some points he seems to extrapolate the emotions of some people into the way the entire American upper class feels about people like him. Not exactly fair when you’re arguing that not all hillbilly’s are bad people. The most prescient lines of the book is when Vance reads an article about poor black neighborhoods and how it reminds him 100% of his own community. Imagine being poor without job prospects, devoid of hope, and the police arrest you at a rate five times higher than the average?

It’s a sad book, but a worthy book. Why are we failing poor communities? What policies can correct that? Is it more welfare or better jobs? Do we reward companies for hiring in depressed places or punish them for leaving? The answer is unclear. But the message is. If we don’t figure it out, a lot of people are going to be left behind.