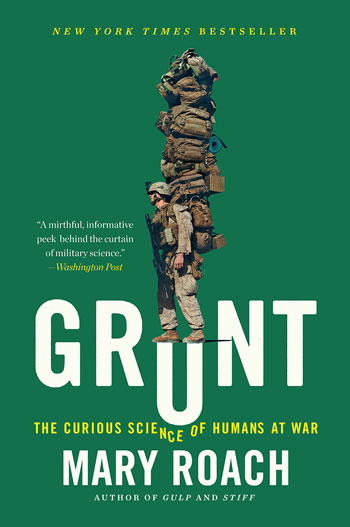 The modern soldier’s chance of survival (at least in the U.S.) is remarkably large compared to any point in history. And the U.S. military is going to great lengths to keep it that way and perhaps make it even better. Mary Roach’s novel Grunt is not about the man on the front line per se, but about the equipment and training he has received. It’s about the men and women behind the lines researching the unique and minute – anything to keep him alive. And there’s a whole lot of interesting research there.

There’s the preventative research. Like what fabrics and chemicals combined can make uniforms that both keep a soldier cool but also are flame retardant? Congratulations, your shirt can keep from lighting for ten seconds but now it’s so heavy a soldier has a hard time marching without overheating – back to the drawing board.

Or how do you train a medic to suppress her flight or fight instinct in the middle of combat? Well, by subjecting her to a super realistic scenario with gory body suits that spray fake blood and feces and have her diagnose while explosions happen all around. Just reading it had me stressed.

Roach explores all of it with an open mind and plenty of wit to spare. Self deprecating but honest in the extreme, she is the perfect host. It’s amazing that she can keep her cool (at least on the page) describing a penis transplant between cadavers, with graphic descriptions, and how polar bears are attracted to menstrual blood.

Why did the U.S. government need to study that? You’ll just have to find out yourself. Grunt is a quick read, accessible for anyone curious about warfare background you never knew existed.