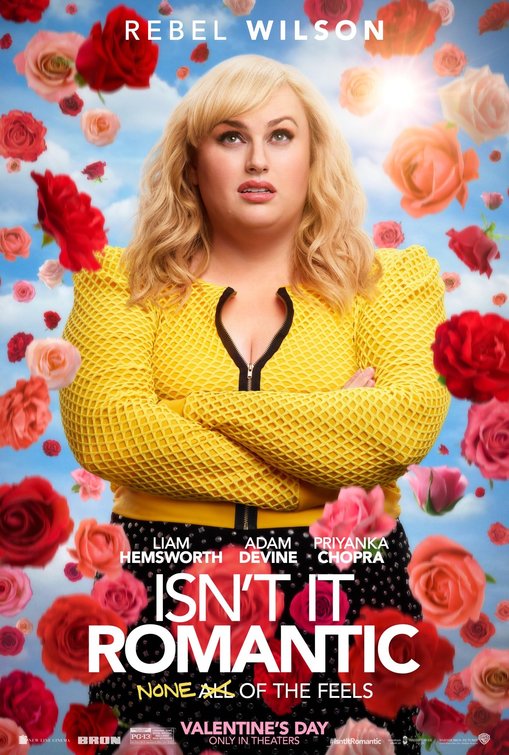 Yes, I did see this on Valentine’s Day. And yes, I would have watched it if it wasn’t on Valentine’s Day either. But now that I have, maybe I wouldn’t. It’s not that Isn’t It Romantic is bad. It’s just not as clever as it wants to be.

Natalie (Rebel Wilson) exists. She’s an architect in New York. She’s kind of the office pushover, she has a crappy apartment, her boss kind of ignores her work – pretty much the standard young person MO these days. The only thing she’s missing is a man, or so she thinks. One day, whilst fighting a mugger, she whacks her head so hard she wakes up inside a romantic comedy. All the guys are hot, the color pallets ramps up the yellows and pinks, and her assistant is suddenly her hot rival at the sexy architect firm. If she’s going to escape, she’s got to play by the romantic comedy cliches and romance her way out of it.

The pitch clearly was “What if someone knew they were in a romantic comedy?” and just filled in the bits from there. Step one: casting Rebel Wilson was definitely the right move. Unconventional (sadly) but the right move for what the movie is ultimately trying to convey. Happiness isn’t about a romantic partner. It’s about loving yourself.

Noble. Clever? Not really. Pointing out romantic comedy cliches just to revel in them isn’t exactly subversive. Isn’t It Romantic is funny. Enjoyable funny. I laughed often, if not loudly. Liam Hemsworth works well as the fake male lead. Rebel is always a riot, and the dialogue is just sharp enough to keep my attention.

But in the end, it’s just another romantic comedy. It really wants to be something else, but it’s not. So it won’t go down in memory with some of the greats it so eagerly skewers. For an afternoon’s distraction though, it’s perfect.