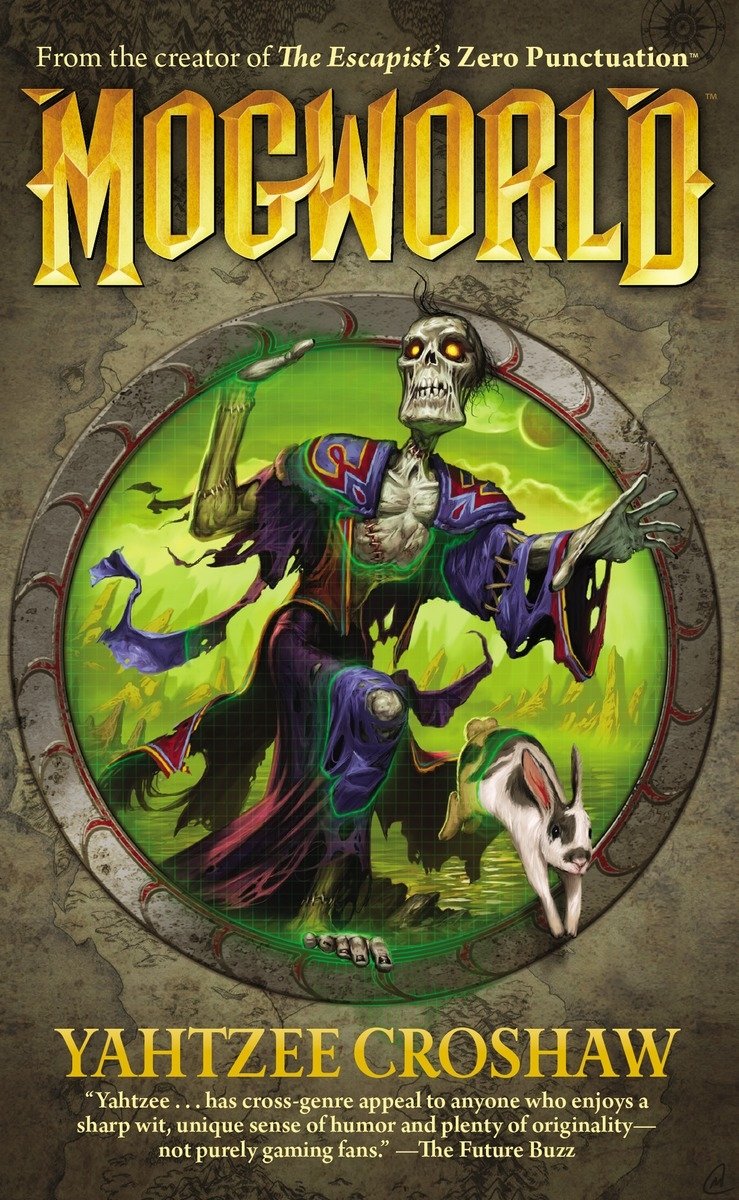 A Christmas gift from my brother to me, Mogworld wouldn’t have caught my attention were it not for the author. Yahtzee Croshaw has an incredibly popular video series reviewing video games. It’s witty, hilarious, and pulls no punches. If you like video games, I encourage you to check it out.

Jim is a student of magic. Or he was, until a roving band of ruffians attack his magic school and rudely kill him. Now, Jim has been resurrected by a necromancer to be a pawn in his undead army. Jim rather liked death and quickly finds out that suicide is not an option when you’re already dead. The ever cheery Meryl will just put you back together again.

But the world has changed. It’s not just Jim who isn’t dying. No one is dying. Or rather, they tend to come back to life. And there’s a whole lot of dead-eyed adventurers around looking for quests and asking for points. What in the world is going on?

Unless you’re also a dead-eyed zombie, you know exactly what is going on. I think the font on the cover of the book gave it away. But, just because you know what it’s about doesn’t mean you won’t enjoy the ride. Yahtzee is a wordsmith if nothing else. The vocabulary on display is expansive. Like I’ve come to expect from his video channel, Mogworld is pretty funny. Characters get in ridiculous situations, die hilariously, banter back and forth. More than once I laughed out loud, which doesn’t happen often when I read books. I mostly just sharply exhale air through my nose.

The bad of Mogworld isn’t much, but it is significant for me. This novel doesn’t have much appeal beyond video game players. Or that’s the group that will enjoy it most. That’s a large group but I’m just saying. The writing style is simultaneously talented and hard to follow. It’s better writing than my first novel (what a plug!) but on many occasions significant action occurred and I missed it and had to re-read passages. Also, despite my prodigious use of them in the last two paragraphs, there were a lot of adverbs in this book. Those get annoying. My final point against the book is a personal one. I think this is the first book I’ve read that used the word retarded the way gamers do. I’m a spread the word to end the word kind of guy. Want me to like the main character? Don’t have him describe people or decisions as retarded. It’s fine if it’s a character I’m not supposed to care about and it makes sense in context of that characters’ life (which on one occasion it did). But otherwise, don’t use it.