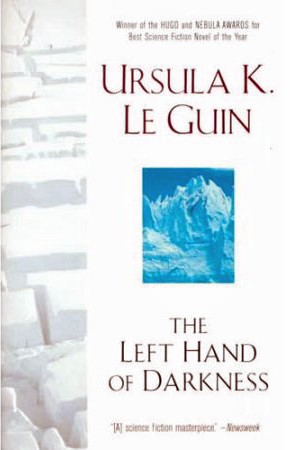 I have a feeling that this book is more famous because it’s one of those “first to do it” sort of situations. On the planet of Winter, Genly Ai has landed as a representative of the Ekumen (a league of human planets, if you will). At some point, humanity colonized the stars, some sort of war ruined the connections between planets, and now a new society has risen up. Their goal, common trade of goods, knowledge, high minded Star Trek stuff. But Winter, as it’s name implies, is a unique place. Not only is it almost always winter, the humans on the planet are androgynous. They have no gender, except once a month, when they become either male or female, and continue the species.

A skilled diplomat, Genly only thinks he knows what is happening on Winter. As he walks the line between two very different forms of government on the planet, threats begin to appear all around, prompted by his very presence on the planet.

At its’ core, this is a book about friendship, trust, and how often we misunderstand each other. It’s also a clear English 200 level gold mine of different readings. Did the author mean this or this? Should we read this through a marxist mindset or a feminist mindset? Is this section really a metaphor for the war in Vietnam? All very possible. All very impossible. The film student’s kind of film.

Doesn’t mean it wasn’t a decent book though. Good writing, some complicated characters. Despite very little happening, I was quite taken with the events as they unfolded, however slowly. I’d pick it up if you are a classic sci-fi fan.