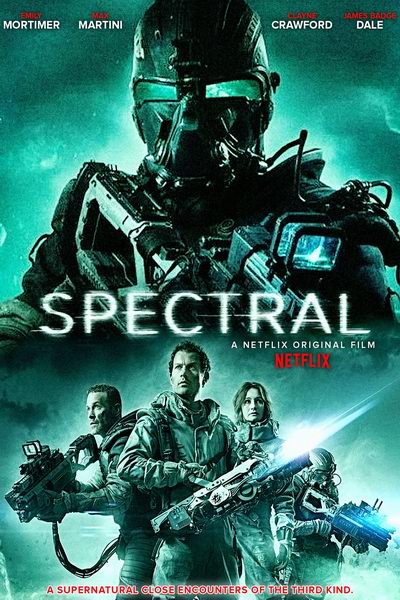 Sometimes you find a little bit of gold in the massive shit that is Netflix original films. Maybe someday the ratio will shift, but right now they really only know how to make TV.

There’s some war in yadda yadda Eastern Europe, the Americans are supporting the whoever guys, and it all gets weird when people start dying in unnatural ways. Ghost like apparitions, that can only be seen through special goggles, are tearing through American forces.

Spectral succeeds despite its paper thin plot and one dimensional characters. I think it’s due to two major things: 1. the set design is pretty amazing. The combo of real scenery and CGI city is fairly effective. 2. Some heavy, heavy editing. You can see actor’s lips moving and not saying what is actually coming out of their mouths. I think some editor said “this is way too long” and recut some boring exposition scenes into something that moves the plot along quicker. And, if we’re being honest, it succeeds because I didn’t directly pay anything to see this movie.

It’s a ridiculous film, but I drank the whole way through and loved it. Even how it took the lead scientist 1 minute to design and build hundreds of ghost shooting rifles. I suggest you drink while watching it too.