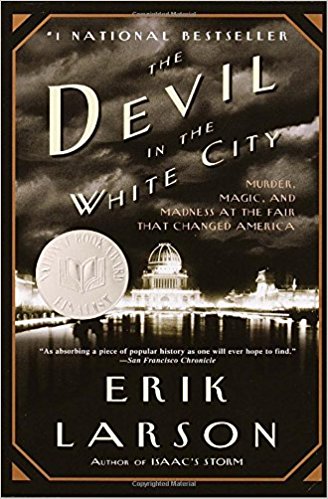 It’s a great juxtaposition. On one side we have the pinnacle of human achievement and ideals. On the other, we have our deepest depravities, living side by side.

Erik Larson is a master story-teller. You may be forgiven for assuming at points that this is a fiction novel. Especially with such a charismatic, emotionally barren lead: Mr. Holmes. He’s not your typical serial killer. He’s the one out of the movies: the vampire that charms his way into getting you to let down your guard. Nor is he the stalker, murdering his way through towns, across America. No, Mr. Holmes built a hotel for the sole purpose of his sick pleasures. Secret rooms, built in gas lines for easy killing, soundproofed walls, and a kiln to dispose of the remains. An architectural abomination.

On the other side we have Mr. Burnham, the head architect for the World’s Fair. America, and Chicago’s, chance to prove to the world that the good old USA is the future. We watch him navigate the various interests and personalities vying to put their own mark on the “White City.” A grand, rushed spectacle the clearly required several miracles to pull off.

As I said, it is a great juxtaposition. But in practice, it’s two books mashed into one. Each as important as the other, surely, but each should really just be a footnote of the other. It’s an easy comparison to make. Especially with an event that so defined the course of US business and architecture; the amount of people who attended guaranteed that any famous person for fifty years beyond the event was indeed a guest at the event. Which means some of them may have brushed shoulders with a serial killer. But, at many points in the novel I tired of hearing how the fair was going, and I wanted to get back to Holmes and the macabre.

The book is by no means bad. Just of a wider scope than perhaps it should be. This is probably a personal opinion. Regardless, it is intensely interesting, full of beautiful and horrible sights. This is the kind of novel that could convince non-nonfiction readers to give it a chance.