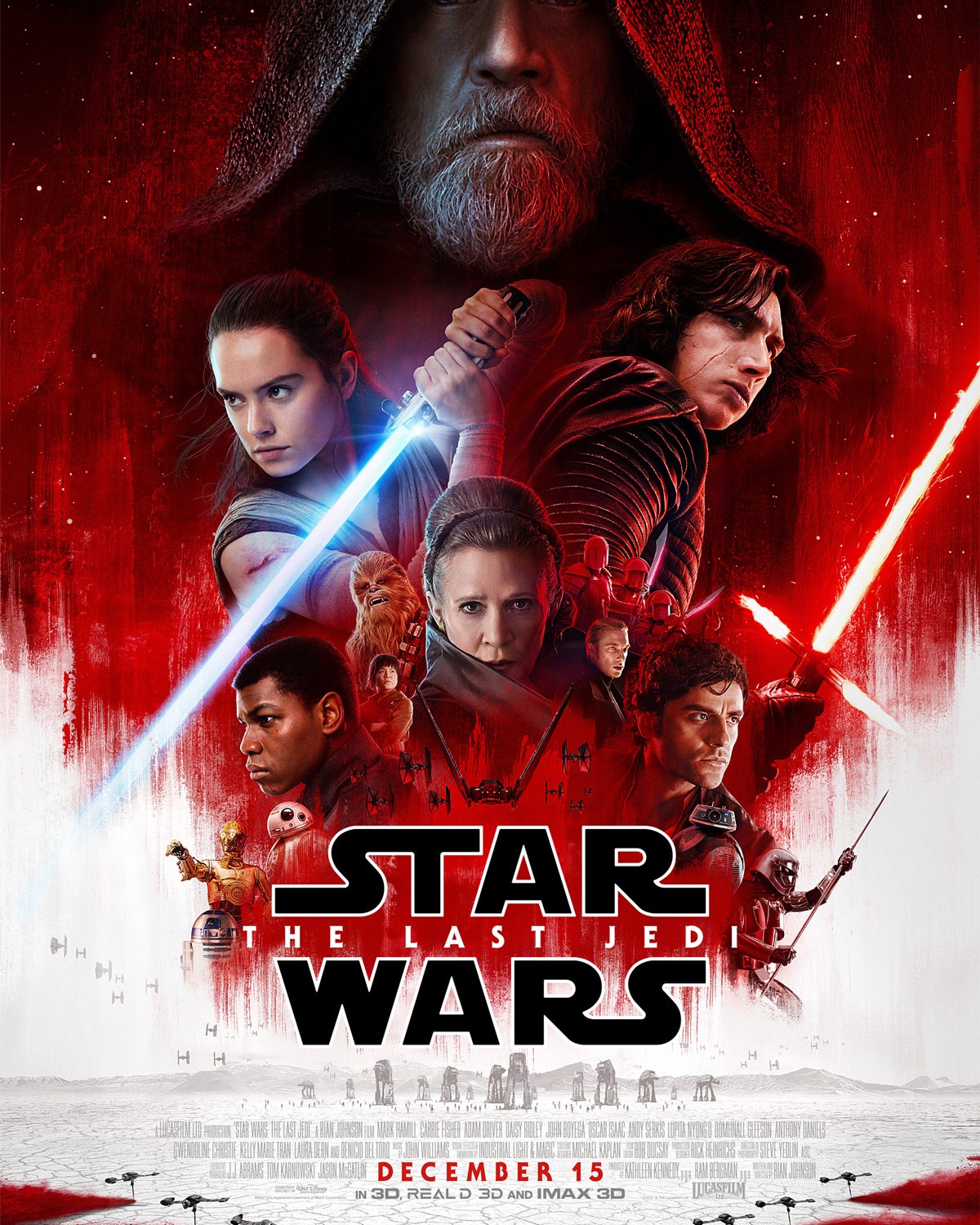 The following review will be spoiler free barring minor plot details. A spoiler-full piece will follow.

In a word: disappointing. The Last Jedi swings into theaters with all the confidence of an overweight Babe Ruth. Sure he can hit the ball, but it better be a home run or he is not making it around the bases.

We open on the Resistance, evacuating the planet they occupied during the destruction of Starkiller Base during The Force Awakens. If the directors wanted you to think any time has passed, that’s thrown out the window when we cut to Rey handing a lightsaber to Luke Skywalker. General Hux, Kylo Ren, and Supreme Leader Snoke, clearly quickly recovered from their losses, jump into system to begin a relentless pursuit of Poe, Leia, and Finn.

The Resistance fighters are very outmatched. And somehow, The First Order has discovered how to track movements through hyperspace. Low on fuel, they are running out of options.

Desperation and survival are the themes here, which if you recall, are the themes of Empire. They quite literally remade a Star Wars movie again, and don’t you tell me differently. I’ll sum up: the good guys are fleeing overwhelming odds, there’s a mentor/mentee training relationship on an isolated planet, AT-AT walkers make an appearance, and the good guys fly speeders at them. The prequels may have been bad original ideas, but at least they were original ideas.

The dialogue is rote and awful. Many characters just repeat back what the last character said to them. There’s some clear Marvel style quips in here that maybe Han Solo could have landed. Here, they fall awkwardly as duds. Many side actors/actresses with small roles get lines of dialogue they had no business trying to emote. I want you to count how many times Leia says the word ‘hope’. I’m thinking at least ten.

Let’s go over the new cast. Laura Dern steps in as the purple haired Vice Admiral Holdo while Leia is waylayed for reasons I won’t say. And she is just awful. Just. God. Awful. Both as a character and in her acting. You run a ship, act like it. Poe literally just committed mutiny and both you and Leia laugh it off like oh boys will be boys. Throw that man in the brig.

Kelly Marie Tran as Rose is fine. Not sure if she’s a love interest or just a new character for us to root for. It’s neither here nor there. Benicio Del Toro as the stuttering code breaker DJ is interesting, though. He’s got the only realistic perspective in a world where planet ending weapons exist. I can’t yet tell what his place in all this is going to be.

As for the old cast of heroes. Rey, Finn, and Poe are fine. But Leia, oh Leia. We love you so Carrie Fisher. And maybe I shouldn’t say this, but she lost her acting ability. It was easier to overlook in Awakens but here it is front and center. Dull and benign, most of her scenes involve her looking like she’s having a vision, but isn’t surprised by it. Maybe if they let her act like Carrie Fisher actually is: funny, snarky, full of wit – instead of the grandmotherly wisdom giver she mostly is here – it would have been the final performance we all needed. Sadly, it’s not.

Is there anything redeemable, Chris? Yes. Adam Driver and Mark Hamill. Kylo Ren is still the confused, angry teen but his arc is complete, his motivations understood. When he yells at Rey, “Kill the past! Let it die!” you can’t help but wonder if he’s talking about Star Wars itself. And you kind of want him to be the one to stick a lightsaber through it’s gut. Something that should have been accomplished in the last film, not this one.

Mark Hamill steals the show, as he should. Mostly because I’m pretty sure that’s just how Mark Hamill is now. A grumpy, sassy old man who doesn’t want to hear about when he was famous. His acting is utterly fantastic. His story line reminiscent of Obi-wan. And his arc with Kylo is tragic, heartfelt and believable. Where Harrison Ford left off, Hamill steps right in. Don’t be surprised if some acting nods come his way.

These things, and Rey’s parental reveal (honestly loved this, great storytelling) are the only redemption in The Last Jedi. Otherwise, it’s just a carbon copy of Empire with a few of the scenes switched around. It’s sad, because Star Wars fans deserve more. They deserve better. Rogue One is a much better film than this, and it has the emotional maturity of a sentient eggplant. But it had unique and interesting new characters, action scenes that made sense, and a story worth telling. Notwithstanding Luke and Kylo’s great acting and stories, The Last Jedi makes you wish it really was the last.

SPOILER-rific tidbits below! Do not keep reading if you haven’t seen it.

Bombers? What kind of fucking bullshit is that? You’re in space. Bombs don’t drop. Don’t send in slow ass bombers straight into the enemy. Of course they all died, are you stupid? Speaking of frontal assaults, Poe and Finn charge new giant AT-ATs in what looks like old pod racers. Oh yeah, you flew in towards their guns and are surprised everyone died? Fuck you.

Oh, so Yoda can control the weather now? And be a literal physical manifestation? Way to be even more like Empire by having him show up.

Kylo killing Snoke was pretty cool, I’ll admit. But the fact that I didn’t get much backstory on Snoke kind of pisses me off.

Everyone talks about Rey’s raw power. She can barely do anything. Oh wow, she moved some rocks, big whoop.

Any self respecting commander would have Poe strung up for dereliction of duty.

Also, Poe does not know Maz Kanata. He just does not. Finn barely knows her either. They should not be calling her. And union dispute? What the hell is this?

What’s with the casino side story with the kids? This is why this movie is the longest one in the series.

The salt planet with the red was actually pretty cool. Awesome visuals.

Does Adam Driver make out with a bottle of olive oil before every scene?

When Kylo flicked on and off the lightsaber real quick to kill that guy, I creamed my pants.

I creamed my pants again when Holdo when to lightspeed and took out all those star destroyers. Literal gasps throughout the theater. But we see BB-8 pilot an AT-ST soon after this. Do they have no other droids who can do suicide missions? The separatists certainly did.

Did Finn really just call Phasma “chromedome”? CHROMEDOME?! Phasma also had a blaster the whole time during this stupid fight and chose not to use it on Finn. And her armor is laser proof? What the hell?

“Laser battering ram.” I laughed out loud in the theater.

They don’t even pretend to call it the Resistance anymore. They literally just start calling it a rebellion. You already did that. Stop doing that. Write a new fucking story you guys.

Seriously, Rey’s parents being just junker nobodies is the best decision in the entire movie. She wants so bad to be someone with a name and Kylo tells it like it is. Shoehorning in an Obi-wan parentage or something would have been dumb at this point.

Oh, ships have shields now? But only some of them? In the expanded universe, every ship has a shield. Here it’s only the really big ones. And fighters can fly in and out of the shields at will. Except when they need a codebreaker to do it. There’s no fucking logic to it and it pisses me off.

Everything Luke said about the Jedi is so painfully true. It’s fantastic. But then he kind of just says Rey is going to be a Jedi anyway. WHYYYYYYYYY.

I am not confident at all for the final Abrams direct film. Nor for the Solo movie.