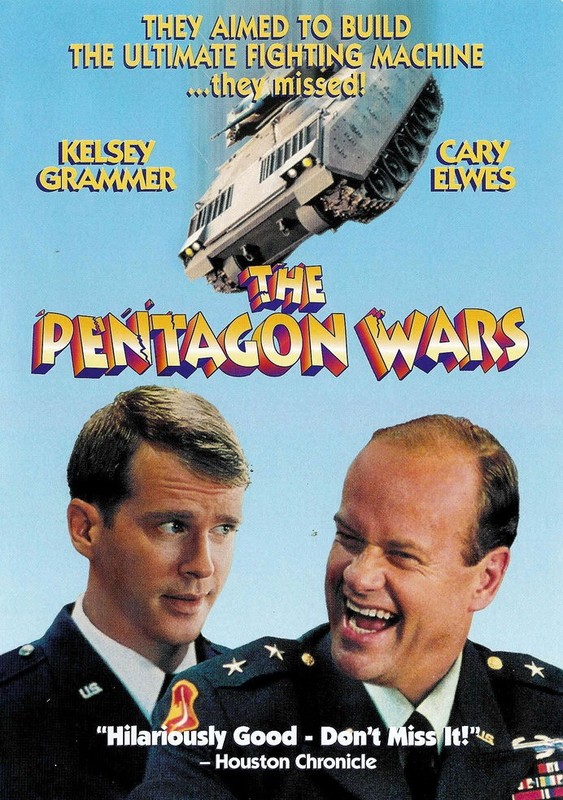 I discovered this movie through a conversation with someone at work. I had posed the question: “If you had to choose the national comedy, what would you choose?” His response was this movie and I think he may be on to something.

The Pentagon Wars is a 1998 HBO film based on a book of the same name. United States Air Force Lieutenant Colonel James Burton (Cary Elwes) has been assigned by Congress to curtail excessive spending by overseeing the testing of several new weapon systems in development . He reports to U.S. Army Major General Partridge (Kelsey Grammer) who wants Burton to quickly approve the Bradley fighting vehicle so that it can begin production immediately. Unfortunately, Burton discovers numerous problems with the Bradley fighting vehicle as well as problems in the development and testing process. He soon becomes embroiled in Pentagon ridiculousness.

Some of the absurdity that occurs in the film is absolutely unbelievable unless, as stated by the coworker who recommended it, the viewer has served in the military. I watched the movie with my father, a retired Navy Captain, and he could match the story with his own ridiculous tales. Burton must jump through numerous hoops to get the tests that he believes will truly determine whether the Bradley is fit for production.

The comedic moments of the film are not entirely made up of clear setups and payoffs made by individuals as jokes, but rather situations and responses that come off as very humorous. What is interesting about the film is that it is actually very serious, this is because the Bradley is a real vehicle employed by the U.S. military, but the film seems to show a purposeful negligence on the part of Army inspectors in order to push the Bradley into production. This priority of the military industrial complex over the men in service is something that President Eisenhower warned of long ago. As a result, the film carries a very serious message alongside its satirical take of the situation.

The acting is nothing outstanding, but certainly does not retract from the film. Elwes does a good job of conveying an officer frustrated with the situation he has been placed in and  Grammer  as an officer more concerned with earning his next rank than ensuring the enlisted have quality equipment. The supporting cast is also good. In relation to the cast, more than anybody else, I was absolutely overjoyed to see John C. McGinley outside his role in Scrubs as Dr. Cox; he gets a few good quips in.

The tagline for the film is “They aimed to build the ultimate fighting machine… they missed!” and The Pentagon Wars makes that abundantly clear. It is, in the end, a comedy, but it has many details that deserve to be explored because if there are people really as uncaring in the same way that Partridge is, then that is a problem. It is a seemingly simple film that contains food for thought, the kind of food that is necessary to try..